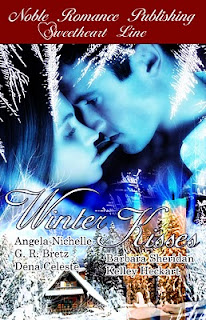 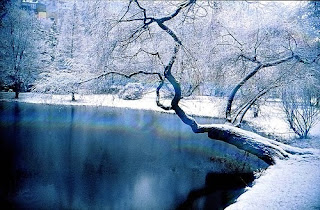 Winter Kisses Anthology by
Barbara Sheridan, Dena Celeste, G.R. Bretz, Kelley Heckart, Nichelle Gregory
Genre: Contemporary, sweet romances, holiday
To purchase or read an excerpt: http://www.nobleromance.com/ or
https://www.nobleromance.com/ItemDisplay.aspx?i=86
*Winter Solstice Kiss by Kelley Heckart:*When Brianna decides to attend the Winter solstice masquerade ball, shenever thought she would end up kissing a handsome knight beneath themistletoe, but they part without exchanging names and phone numbers. How will they find each other again?
A Christmas for Carol by Angela Nichelle:Imagine losing the love of your life right before Christmas. It's anightmare Carol Christine Moore had to face two years ago. Unable to copewith the pain of losing her fiancé so unexpectedly, Carol closes off herheart entirely. She puts all of her time and energy into making the coffeeshop she owns with her best friend a success. Consumed with customers andthe daily grind, Carol has convinced herself that she doesn't need anythingor anyone else in her life.But all that changes the day Grant walks into the Cafe Bean.
*Love in the Lights by Dena Celeste:*Abigail Bloch has been away at school for the last few years. Returning toher mother’s home renews her interest and need for the Jewish traditions.Unfortunately, the man who had been her best friend growing up, JoshuaCohen, gives her a chilly reception. Over the course of Chanukah, a timefilled with food and family and friendship, the growing number of flamesmust melt away the hostility and illuminate the love that can grow betweenthem.
*A Schrödinger Christmas – Holly by G. R. Bretz:*She’s the girl who lives in his dreams, but she’s so much more than that.She’s the girl he was supposed to meet, twice. She’s the path he didn’ttake, twice. That was forty years ago and you just can’t go back, except indreams.But it’s Christmas day. Miracles have been known to happen. Who knows? Thethird time just might be the charm.
*Christmas Rush by Barbara Sheridan:*Ellie Bouchard died just after formulating a plan to see that her only childRemy would be reunited with the one person he was too stubborn toacknowledge as “The One”.Determined to see her plan through, Ellie will do whatever ittakes—including heavenly blackmail and a few sneaky tricks—to see her sonreunited with his childhood companion, Michael Carson.The stubborn young men don’t make Ellie’s job easy and she puts on one hellof a Christmas Rush to cement their bond before her time between this worldand the next runs out.
Kelley Heckart
'Timeless tales of romance, conflict & magic'
http://www.kelleyheckart.com/
http://twitter.com/CelticChick
http://www.goodreads.com/kheckart
http://www.facebook.com/pages/Kelley-Heckart/111838455604
http://www.myspace.com/phantomqueen3

Posted by Kelley Heckart at 2:18 PM No comments:

I thought we should end the year with a guy who makes sweating in a jungle look tempting. My long hair hottie pick for December is Josh Holloway who plays the con man everyone loves to hate on Lost. Don't you just want to jump in a stream with Sawyer and cool off? Long hair and face scruff equal hot guy.


http://www.kelleyheckart.com
Posted by Kelley Heckart at 11:41 AM 4 comments: