.99 for a limited time. Grab your copy of this captivating paranormal romance now! 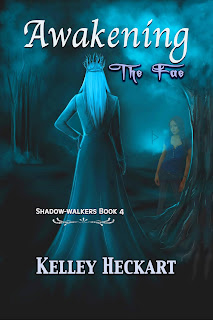 (This is a standalone story in the Shadow-walkers series.)

Time can’t separate them, but fate can.
Do you like time travel stories with a hot elven king and lots of twists? The women are the rock stars here, and they command the supernatural alpha males in their lives. Grab a copy now and enter the sexy, scary, and thrilling world of Shadow-walkers. This compelling romance will capture your soul.

She’s the most powerful Shadow-walker…and the most vulnerable.

Dina, the wild, strong-willed drummer for Hecate’s Fury and wearer of the Gateway rune, is thrust back in time where she meets a tall, handsome faery king. Beneath all the beauty of the aes sidhe city lurks a dark, menacing danger, and nothing is as it seems. She may be the only one to help them, but the cost to her is high.

Beware a kiss in moonlight.

Roan may be the only male to tame Dina’s restless spirit, the king’s cold nature both enticing and challenging. However, another covets her Shadow-walker and bruja powers. The rival’s obsession is relentless, his magic difficult to resist, even for a Shadow-walker.

Past and present collide as both males vie for her. Only the power of love and sacrifice can unite her with her true mate.
*
Excerpt:


Damn. If they were LARPing, they took it very seriously and didn’t break from their roles as they dragged me into the woods and out the other side. I gaped at the scene across the stone bridge. A palace and smaller structures built on top of pillars, all made of white stone like they’d been carved there by gods, were nestled beneath the high, rocky, grass-covered cliffs. Sparkling waterfalls flowed down beneath the cliff-side city and emptied into a river. Small trees adorned the landscape and added color to the gleaming white structures. Had I stepped into a fantasy novel?
My captors pushed me toward the bridge spanning the river.
I scowled at them. “Hey, dudes, easy.”
“Walk or I will have you dragged across,” the leader grated between clenched teeth.
I lifted my chin and walked, the two men holding my arms. They led me up marble steps to an arched doorway. The leader stepped ahead of us, motioning for all four men to wait with me. After a few minutes, he reappeared, and then my captors thrust me inside the huge domed building I’d seen across the bridge. Gripping my upper arms in a painful hold, they ushered me down an entryway lined with torches and steered me around a central stone fire pit. They shoved me forward and released me so abruptly I fell to my knees, landing hard on a bearskin rug. I started to stand and was forced back down.
“Kneel before King Roan,” the leader rasped as he pushed on the back of my neck.
My head forcefully bent, I raised my gaze to the shadowed figure in the rear of the large room, glimpsing stone statues of animals and beautiful god-like beings peeking from the alcoves, an array of silvery, life-like etchings glimmering in the dimness.
The king stepped off a carved, pelt-covered wooden throne nestled between the trunks of two oak trees that grew out the curved roof. He came forward. A cold sneer curled his clean-shaven lip. Daylight beamed inside from a high window, illuminating him in a golden splash of light that bathed him in an ethereal radiance. My gaze widened. King Roan was the most beautiful, fiercest-looking man I’d ever seen with long white-blond hair and icy blue-gray eyes beneath thick, dark eyebrows. His skin was like milk. He wore a spotless, long-sleeved, belted purple tunic, dark brown leggings, and a simple but regal silver branch-like headband.
Seriously, where the hell am I? In a Lord of the Rings dream? Because this guy looked like one of the Grey Elves. That had been one powerful joint Selena had given me. Had the person who had paid her to drug me known this—whatever this was—would happen?
The king prodded me with his leather-booted foot. “Who is this? She wears strange clothing.”
Huh, I’m thinking the same thing about you.
The ninja leader unwrapped his headscarf. “We found her inside our barriers.”
“A human breached our barriers?” A slight tone of alarm filled the king’s deep voice.
Human? What?
“I-I don’t know how I arrived here.”
The ninja leader seized the back of my neck, causing shooting pain, and I winced.
“Do not speak to the king unless told to do so,” he growled.
King Roan waved his hand downward. “Release her, Commander.”
He did but roughly pushed my head before he backed off. I turned a glare on the commander, cringed beneath his withering stare, and then faced the king, deciding it might be wise, at least for now, to keep my eyes lowered. These people were acting strange, and my gut was warning me to be careful.
King Roan grunted and put his finger beneath my chin, coaxing me to look at him. “What is your name?”
“Dina.”
His touch produced strange tingles. I quivered beneath his stare, the blue-gray in his eyes flickering and softening for a moment, his jaw set tight.
He quickly withdrew his finger and cleared his throat as if the brief spark of emotion when he’d touched me surprised him. “Rise.”
*

Posted by Kelley Heckart at 10:23 AM No comments: