New Release! Do you like romance, intrigue, and star-crossed love? A mixture of history and Celtic mythology, Cat’s Curse is an ancient Scotland paranormal romance based on a real Irish king known as Aedan the Treacherous in the Welsh court. Warning: Iron-willed enchantresses, hunky sword-wielding warriors, some violence and steamy sex, more than a little blood-drinking, a complicated love triangle, and lots of passion.

He’s a cursed, exiled Irish prince. She’s a succubus with lost memories. Destiny brought them together. Their dark secrets will tear them apart. 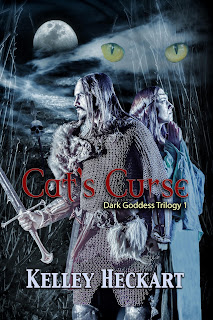 Cardea climbed on top of him and brushed her naked body along his shaft in a slow, sensual cat-like crawl. His muscles caressed her skin, and she wanted him more than she’d ever wanted another.

“Ye desire to ride the horse.” He chuckled, low and soft. “I thought as much.”

She slid onto him, his length eliciting tremors throughout, the passion and bloodlust building to great heights. The hard lines of his face softened, and his eyes brightened to a joyful blue different from the tormented darkness always present there. He cupped her breasts in his large hands, teasing her nipples to peaks. A blissful shiver rushed from her nipples to her sex.

“I enjoy the view from here.” He grinned at her.

She glided up and down on his hard, sleek shaft, circling her hips to find the point of pleasure. Pleasing shocks coursed through her pelvis, the orgasm cresting. She used her inner muscles to squeeze his length, eliciting a groan from him. It filled her with a sense of power to have such a hold on him if only for a short time.

Aedan’s breathing grew ragged with exertion as his orgasm closed in.

She bent against his chest and found the bulging vein in his neck. Her breasts pressed against his muscled chest in a pleasing crush, their hearts beating as one. The blood pumped in his vein, loud and hypnotic, demanding she drink. She licked his neck, savored the saltiness of his skin, and lost her hold on her emotions. Overpowered by the bloodlust, Cardea’s eyeteeth lengthened with both desire and hunger. Her lower body trembled, giving her the sensation of teetering on the edge of an abyss.

“Cardea,” he whispered in a ragged voice, grasped her hips, and pushed himself deeper within her, his entire length pressing to her core.

Aedan’s body quaked and rocked beneath her, his deep penetration inducing moans and shudders from her. Groaning, he exploded his seed inside of her in a powerful pent-up surge.

His potent orgasm sent her over the edge. She sank her fangs into his neck and drank his warm blood. Overcome with multiple orgasms, she plummeted into the blissful abyss. His life force flowed into her, exhilarating and intimate, linking them together. Just as she reached the bottom of the chasm, she experienced the sensation of being lifted by dark wings, hovering above the clouds in the land of the moon and stars.

Fire engulfed her body, rendering her powerless as if the brilliant sun were about to turn her into ash. His blood tasted sweeter than any she’d ever swallowed. She forgot about everything else, and she could not stop drinking his blood.

“Cardea?” He resisted, and then his struggles weakened.

A sudden clear thought rang inside her head, and she pulled herself away. He lay still, and panic quickened her pulse.

“Aedan? Oh no. Wake up, Aedan!” She shook him hard until he let out a soft groan.

Cardea woke as if from a daze. “What have I done?” she cried.

He’d think she was an animal for feeding on him, and she could not endure the disgusted look he would surely cast upon her.

Before he could recover his senses, she waved her hand over his face. “You will not remember. Sleep now,” she said, speaking in the sorcerers’ tongue, the language of the Romans.

Using her first and second finger, she touched the two holes in his neck and healed them with her magic.

A realization hit her. She’d done more than just touch him and he was still human. Something else troubled her about their dark embrace. A strange feeling had flowed into her mind when she had taken his blood from him.

Check out the other steamy excerpts from some talented authors: http://mfrwsteam.blogspot.com/