The History of the Cross 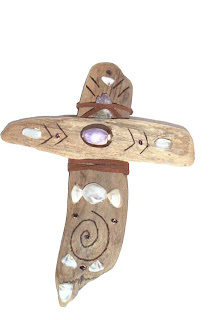 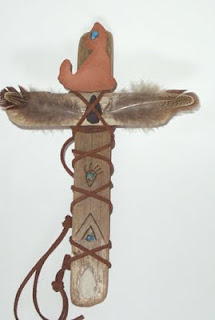 I started making crosses about eight years ago, crafting them from pieces of wood and other things I would find like crystals, stones, shells and feathers. The first cross I made was as a get well gift to my mom who was very ill and in the hospital. My little cross rested on my mom's nightstand and she recovered from her illness. Did the cross I made for her make her better? Maybe, maybe not, but from then on I wanted to keep making crosses. When my mom bought me a wood burning tool, I was so excited. I started making larger crosses with Canadian driftwood, burning in either American Indian symbols, Runes or Neolithic symbols, depending on what style I was making. Crosses have a special meaning to me, a powerful symbol that has existed for many centuries.
Each cross I make is unique. When I look at the blank piece of wood, it speaks to me, it's special energy guiding me toward creating a unique design. The three styles I work with are Southwest, Runes and Goddess. I have gathered a multitude of decorations from amethyst and crystal points, moonstones, turquoise, garnets, carnelians and many other stones to various shells, small dream catchers and other items I come across at swap meets. I am fortunate to live in a place where it is easy and inexpensive to find these items. Each cross I make has a special meaning to me and sometimes it is hard to part with them, but I feel good when I hear a heartwarming story from a buyer. One particular cross I made with a dragon centerpiece was purchased to be placed with a dearly departed friend. My crosses have journeyed all over the U.S. and beyond to the Otherworld. As an artist, that gives me a sense of immortality--long after I am gone my crosses will survive, leaving a part of me behind.
I have posted some information on the history of the cross below:
Crosses were around long before Christianity as the most cherished of religious symbols. It is believed that the ancient Cross symbolized the earth's four directions and the divine center. Spaniards saw Indians worshipping the Cross. The Peruvians and Babylonians had the Maltese Cross. The druids were believed to have made their Cross out of a stem and two branches of the oak tree. Buddhist Crosses are common throughout the East. The Thor's hammer Cross is a well-known Pre-Christian Cross and several deities of ancient Egypt hold a Cross in their hands. Wheeled Crosses are seen on some Pre-Christian stones, possibly as symbols of solar worship.
Ireland is known for its many ancient Crosses. Pre-Christian Crosses have been identified at Dowth and New Grange on the Boyne, Knockmany of Tyrone, Deer Park of Fermanagh, Cloverhill of Sligo and Slieve-ha-Calliagh near Lough Crew of Meath. The ancient faery people of Ireland, the Tuath-de-Danaan, had Crosses that were adorned with snakes, birds and other animals. In the Scottish Highlands, the Fiery Cross, when dipped in goat's blood and flaming, was a message of alarm among the wild tribes. A serpentine figure was often twisted around the Fiery Cross.
The Cross is still a very powerful symbol of faith all over the world.
My crosses can be found on http://www.ebay.com/ by putting wall crosses in the 'find' box and home and garden in the 'in' box. To refine the search, go to the left under Refine Search and specify seller by entering 'havasukelley'
Kelley
'Timeless tales of romance, conflict & magic'
http://www.kelleyheckart.com
http://www.myspace.com/phantomqueen3
http://twitter.com/CelticChick

Can I just say what a relief to find someone who actually knows what theyre talking about on the internet. You definitely know how to bring an issue to light and make it important. More people need to read this and understand this side of the story. I cant believe youre not more popular because you definitely have the gift.