Balin isn’t the typical perfect hero. He is a broken man who has lost everything, including his physical perfection. When Nahla first meets him, she is appalled that Artemis would choose a lamed man for her champion. She thinks there must be some mistake, but no, they are bound together for one reason: to kill Aramon, the same man who also betrayed Nahla and destroyed Artemis’s temple.
Once a king and strong warrior, Balin is now an angry drunk living in a cave when he accidentally summons Nahla from the Shadowlands. He must work hard to heal his leg injury, but he also has mental wounds to heal. The memories of his family’s dying screams as his palace burnt to the ground haunt him. The massive defeat left the once-arrogant man crushed.
At first he doesn’t know what to make of the cold-eyed female nagging at him and pushing him to be strong. He isn’t used to a woman acting so brazenly toward him. A proud man, it is difficult for him to be viewed as a cripple. He struggles with this as Nahla uses her healing magic on him. With her help, he becomes a much better man, but not without a struggle. 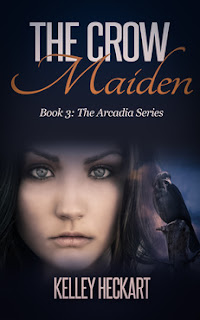 Excerpt (PG-13)
Balin gaped at her and then pinched the bridge of his nose. Her startling declaration cleared his mind of the wine and rendered him clear-headed for a moment. How could he have summoned this woman, this Crow Maiden? A warrior paid no mind to such nonsense, but there were others who believed in magic and the power of the gods.
Emboldened by the wine spirits, he’d turned to Artemis for help. It was unwise to call on Poseidon, Zeus’s brother, to aid him in killing one of Zeus’s mortal allies.
He scowled at her. This female must be telling the truth. Why else would Artemis bring them together if they hadn’t asked for revenge and death to the same man?
“You want revenge on Aramon, and I need a champion,” she narrowed her eyes at his damaged leg, “a strong warrior to help free me.”
Anger rose inside. So this female with the cold bearing of one of Night’s daughters thought him weak?
“If you bring him here, I can easily take his head off.” In a quick, smooth motion, he picked up the bronze axe and swung it in a succession of swift, skilled movements he had been practicing in the hope that someday he might use it to kill his enemy. The brutal edge of an axe blade seemed a fitting end to the man who took everything from him.
“No. He cannot be killed by normal means.”
He stopped and faced her.
“It will take a magical weapon to kill him.” She watched him with raised eyebrows. Surprise or admiration? It caught him off guard.
“Why not?” According to some, Zeus’s priest-king had magical powers. Balin never believed the rumors. But then he never thought he would summon a strange female to his cave.
“Because he is a sorcerer-king, a very powerful one.”
“Of course he is.” He squeezed the axe handle so hard his knuckles cramped. Defeating Aramon seemed impossible.
“I know this is a shock to you.”
“Do you know where we can get a magical weapon?” He shrugged and twirled the heavy axe in his hand as if it were a light stick. Every day since he’d been able to move around after his injury, he’d swung the heavy axe to keep himself in fighting shape.
“You use that blade quite well despite your injury.” Her eyes glimmered with growing interest. “The weapon I speak of is a battle-axe, double-bladed, just like that one. It belongs to Artemis, but it has been lost.”
“If you are speaking of the axe Artemis lost to the centaurs, then it is hopeless. They are Aramon’s allies and a ferocious lot.”
She watched him with a mysterious glint in her eyes.
“Why are you looking at me like that?”
“You do not seem like a man that would be afraid of centaurs. Besides, not all centaurs are loyal to Aramon. One line is loyal to Artemis, the line from which the great King Arcas was born.”
“King Arcas was a centaur?” The remarkable Arcadian king had restored his lands after destructive battles and a terrible flood brought on by his grandfather’s recklessness, but none of the stories mentioned Arcas was a centaur.
“Yes and no. It was a secret well kept by the nymphs, but it matters not to us and what has to be done now.” One side of her mouth curved into a cold, mocking smile. “Does that make you less afraid of centaurs knowing that?”
He glowered at her. “I am not afraid of centaurs or anything else. The journey is a long one and through rough terrain.”
“You would give up so easily?” Her green eyes held a fierce, daring light.
His face grew hot beneath her unyielding gaze. No woman had ever challenged him. It was a bit unsettling…and exciting. “Never.”
In truth, he’d given up until this strange female appeared in his cave. And how much could he accomplish with a crippled leg? His mind was still muddled by too much strong, barely watered-down wine. He wasn’t even completely convinced this woman in his cave was real and not an imagined image from one of his many tormenting dreams.
“Then we have a lot of work to do.”
*

“Ms. Heckart draws the reader into the pages and enchants them with her words.”
Karen McGill, Coffee Time Romance