This one fell a little flat for me, but maybe nothing could compare to the awesome season six finale. My expectations were too high. Anyway, there were still some bright moments in the final episode of season seven.

The Starks finally got to put an end to the person who started everything, the person who got their father executed. I kind of felt sorry for Littlefinger, but not too much. My only gripe is that it felt forced and rushed. The writers had the viewers thinking Arya and Sansa were going to go against each other and then, wham, Littlefinger is getting his throat slashed. I’m all for twists and surprises, but it seemed like we were deliberately misled. It could have been handled better.

This whole season, ever since Jon Snow and Daenarys met, I’ve been bothered by them getting together. At first I thought it was because of the incest factor, but I realized it’s because now that they’ve consummated their relationship, they are doomed—star-crossed lovers. There are no happy endings in Martin’s world. I like both of these characters and now I’m sure they will both die after they do what’s necessary to save the world. I get the feeling Daenarys is fated to die giving birth just like Jon’s mother. Jon will probably die in battle. I doubt they will live happily ever after. They are destined to save the world so others can live happy lives. 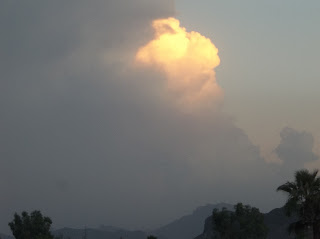 There’s a lot of talk online about the identity of Azor Ahai, The Prince Who Was Promised. Everyone thinks it’s either Dany or Jon, but I have a different theory. That’s too obvious. I think it’s Jaime Lannister. He’s not the obvious choice, but he’s gone through major changes since season one. I hated him when he pushed Bran out the tower window, but then the Starks captured him in battle and he lost his hand. With Brienne’s help, he changed, he grew a conscience. I’ve liked him ever since then. And now at the end of season seven, he finally had the balls to leave his treacherous harpy sister. It looks like he’s headed toward the North to fight the whitewalkers, which fits the prophecy. He’s is also probably fated to kill his coldhearted sister/lover Cersei. I know it’s a farfetched theory, but that’s what I’m going with. I’d like to see him become the hero. I’m a fan of redemption.

My other gripe is we only got to see one brief flashback of Rhaegar and Lyanna. It was cool seeing their secret wedding, but come on, I want more.

I sure hope the final season lives up to what we expect of Martin’s world. Please do not give us some cheesy happy ending. There must be sacrifices at the end of this tragic story, even if it means the death of some favorite characters.