Passion and betrayal in ancient Greece, The Bear Goddess #MFRWsteam 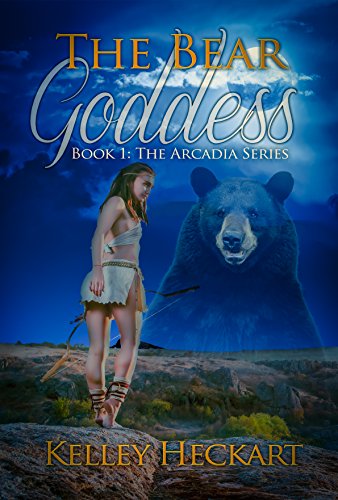 Callisto is the nymph who betrayed Artemis. This is her story.

Callisto, the daughter of the great Arcadian King Lycaon and the nymph Maia, has taken a sacred vow of purity, forsaking all others for Artemis, and attains the revered position of Bear Goddess among the nymphs. When she meets Kasin, a follower of Zeus and her sworn enemy, her life is shattered.

Kasin is a centaur prince and one of few who can take human shape. Despite having sworn allegiance to Zeus, he saves the life of one of Artemis’s nymphs. He is torn between his love for Callisto and his duty to his people and his god.

When their secret, forbidden connection is exposed, and they make their escape, danger and betrayal follow Kasin and Callisto. To survive, they must evade a god obsessed with having Callisto for himself, as well as others who also want to keep them apart. With a devastating war looming between the centaurs and the nymphs, Callisto must make a difficult choice. To prevent bloodshed and to save an innocent life, she must die.

Despite looking frightened at first, she had given her consent and now she willingly arched her hips to meet Kasin’s thrusts and drive him deeper. Her tightness engulfed him in a warm, soft, heaven-like place. She was like a precious stone only just discovered and polished to a beautiful sheen, untouched by any other man. Her clean, floral scent spoke of her purity and drove his desire.

He stopped himself from ravishing her. He didn’t want to hurt or frighten her, but she surprised him by writhing and capturing him deeper inside of her. Her nails raked against his back in fierce abandon and he let out a satisfying groan. Smiling, he enjoyed the pleasant shiver her boldness produced. She was not as delicate as a flower. In the throes of coupling, she possessed the fierceness of a centauride along with the tenderness he craved in a mate.

Letting go of his hesitation, he took her with passion and force, surrendering to the throes of lovemaking. He delighted in taking her innocence, producing in him a sense of power, and strangely, he had a twinge of affection for her because she trusted him with something so precious to her.

Her body shuddered in the final throes of rutting, her quivers gently milking him, releasing his pent-up lust. Twin tremors racked their bodies. His groans and her strangled cries mingled as one unbridled, passionate sound.

He held her close even after the final shudder had subsided. Gods, he had never experienced such lovemaking. And he had never bedded a virgin. The sense that she belonged to him tightened around him and wouldn’t let go.

Her flushed look of passion turned into a troubled look. “What have I done?” She eased out from under him. “I do not know what kind of enchantment came over me.”

“Do you regret our coupling because I worship Zeus?” He tried to keep the anger out of his voice.

“No.” She sat with her knees drawn up to her chest. “I have taken a vow to serve only Artemis.”

“You seemed to enjoy what I was doing to you.” He savored her scent lingering on his skin, an intoxicating scent that tightened around his loins like an alluring ribbon of mist. He wanted more of her, but he hesitated to reveal his true feelings for her until he knew of her feelings.

“It does not matter. It cannot happen again.”

He shook his head. “How can you deny yourself pleasure?”

“Because the penalty for breaking my vow is death.” Tears glistened in her eyes.

He sat up. Part of him felt some guilt for being party to her disgrace.

“I am no longer worthy of my goddess.” She lowered her head.

He cupped her chin in his hand, compelled to take the risk and reveal a small part of his feelings. “You are worthy to me.” Gazing at her, he conveyed the warmth in his heart with his eyes.

Check out the other steamy posts from these MFRW authors.

Nothing like a vow of chastity to cause trouble in a romance!

Penalty of death - hmm - that's an obstacle they are going to have to overcome.
Tweeted.

I wonder how she'll wiggle out of that vow. I'l bet there's lots of wiggling involved.

Intriguing. Thanks for sharing.

Looks like that vow has flown out the window!

Vows of chastity can be such downers. However, I suspect Artemis will be deeply displeased with her handmaidens choice. Great snippet!

Oh, so well done, throughout! I especially loved these lines:

She was like a precious stone only just discovered and polished to a beautiful sheen, untouched by any other man. Her clean, floral scent spoke of her purity and drove his desire.