Sometimes the end is really the beginning. Awakening: A Shadow-walkers supernatural romance #MFRWHooks

Sometimes, the end is really the beginning.

After destroying her successful music career, the close friendship with her bandmates, and her marriage, author Kaitlyn Storm, aka Kate Wolf, former bassist for the all-female rock band Hecate’s Fury, is given a second chance. She receives an offer to turn her book series into three movies, but her troubled rock-star past continues to haunt her.

She never expected to find love or a way back.

When she is trapped in a haunted cabin during a snowstorm with Kane Devlin, the hot Scottish movie star playing her hero, their rising passion for one another ignites. What they awakened will change their lives, but before she can move on, Kate must let go of the guilt and shame keeping her from claiming her shared destiny. For she may not know it yet, but she and her bandmates are chosen. 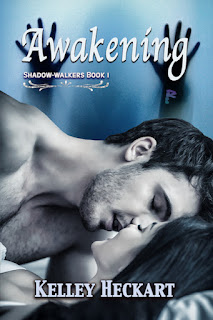 I didn’t get any more texts from Kane that night, but he was probably busy or sleeping, since there was an eight-hour time difference. Too excited about his earlier text, I could hardly sleep.

First thing in the morning, I texted Britany. Hey, Brit. Kane said to check with you. Said he had a surprise for me. Going nuts here.

It’s a plane ticket to Ireland. GF, he’s so in love with you.

Stunned, I gaped at her message. He was sending for me, which meant he wanted to go public with our relationship.

I had to be sure so I texted him. Wow. What a surprise. Are you sure you are ready? I am if you are.

I went about my Sunday, coordinating a schedule of what I needed done with my new P.A. Apparently, P.A.s did whatever you wanted them to do, within reason of course. Well, it had to be legal anyway.

Still nothing from Kane. Too jacked up to work, I picked up my bass and played along to some songs. Someone banged on my door. I sighed, paused my music file on my laptop, set my bass down and turned off my amp. Probably an angry neighbor coming to complain about the loud noise. More frantic raps reverberated.

Britany stood there, crying. “Where the hell have you been? I’ve been trying to call you.”

My chest tightened. “Here. I was playing my bass. I didn’t hear my phone. What’s wrong? Come inside.” I moved aside and shut the door behind her.

“It’s Kane. There was an accident on the set. He was hurt during a fight scene. It’s serious, Kaitlyn.”

Check out the other books hooks from some talented authors:

Posted by Kelley Heckart at 2:00 AM

I love your cover!!

A great hook to tease

From the height of anticipation to the depths of disappointment, all in a few seconds. Sad.