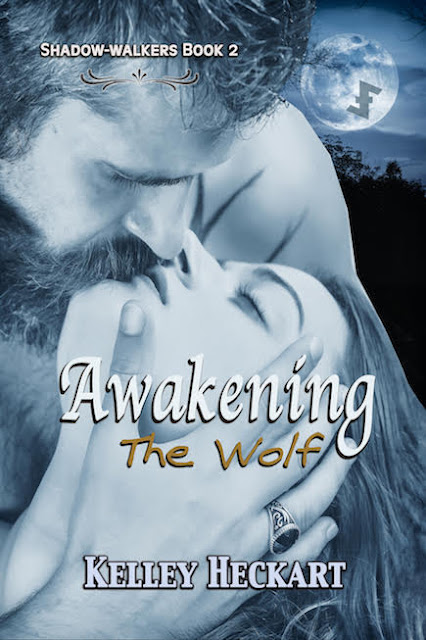 Do you like paranormal romances with hunky werewolves and a murder mystery? Rock Star meets Supernatural in this exciting new series. The women are the rock stars here, and they command the supernatural alpha males in their lives. Grab a copy now and enter the sexy, scary, and thrilling world of Shadow-walkers.

She doesn’t believe in love.

The controversial, promiscuous lead singer of the all-female hard rock band Hecate’s Fury, Cyn has vowed never to commit to one man. She’s also a Shadow-walker, whose Wolfsangel rune binds her to werewolves.

Even her unrestrained heart can be captured.

Two charming, handsome werewolves vie for her attentions. Both are suspects. As the clues lead to a shocking discovery connected to her past, Cyn realizes she is tied to these werewolves by more than her mystical rune. Even if she opens her heart to love, werewolves are monogamous. She is not.

“What are you waiting for? I thought you were eager to see what was inside.” Lucius held the handle of the sturdy rectangular metal box.

“It’s something Henry told me tonight, that some things are best left alone. What if it’s like opening Pandora’s box?”

It was a weird coincidence that my cat’s name was Pandora.

My Spidey senses tingled. “What if people get hurt by what’s inside?”

“What about finding Eddie’s killer?” he asked.

“Eddie’s gone. There’s nothing we can do that will bring him back.”

“You are a wise woman, Blue.” Lucius’s eyes sparkled with admiration. “Maybe he entrusted you with the key to keep it away from the box.”

I sucked in a deep breath, the dreaded box glinting in the moon’s light. “We need to get rid of it.”

“First, I have to kiss you again,” he rasped and leaned in, the cold metal container pressed between us.

He crushed his lips to mine and eased his tongue inside my mouth. Warmth and tingles consumed me. That ache between my thighs grew into an unbearable tight knot that needed release. My knees weakened, and I was grateful for his strong arms as he let go of the box and embraced me.

The metal case dropped to the ground with a clunk, and the key slipped from my fingers.

Lucius yanked off his flannel from over his T-shirt and placed it on the ground. Gently, he lowered me down onto the soft shirt. He knelt before me, unfastened and tugged my jeans down, his eyes shining with desire like he was opening a wrapped gift.

Beneath his appreciative gaze, I kicked off my boots and my jeans and then shimmied out of my G-string.

Growling, he positioned himself between my legs and nibbled my naked thigh, moving his mouth up to my sex, nuzzling my waxed pussy. He suckled my nub, his stubble eliciting delightful quivers against my bare skin. He knew just where to lick and suckle to bring me pleasure. I’d never been kissed down there with such tenderness, like he really cared about satisfying me. Ready to explode from his passionate caresses, I fisted his hair, moaning and writhing. His flicking tongue sent me into orgasmic heaven, my body shuddering beneath his mouth.

He leaned back and opened his jeans, his huge erection bobbing upward. I clutched him, squeezing his hard, velvety length while I pulled a condom from my small purse.

At his raised eyebrows, I shrugged. “Always prepared.” I rolled it on and guided him to my sex. Arching up to receive him, I ached for more of him.

He plunged into me, leaning down to kiss my mouth while he thrust deeper. Tasting myself on him only heightened my excitement. We were one soul. I’d never felt anything like this before. Moonlight embraced us in cold, silver light like a blessing.

The handsome werewolf slid his lips along my neck, filling me with thousands of blissful sensations as I clenched around him, his tender yet impassioned thrusts stroking my inner walls. I wanted him deeper, and I wrapped my legs around him, drawing him closer. His powerful body bucked against mine, so primal and so heavenly. Beneath the moon’s glow, we found our rhythm and moved as one being.

Lucius groaned, and his body jerked with his orgasm. He drew his mouth back, and his eyes glowed amber, his teeth elongating. Feral passion glittered in his gaze.

I should have been terrified, but I wasn’t. A thrilling shudder rippled through me, and I clutched his back, digging my fingernails into his shirt. I glided my nub against his skin and came right after, my body rolling with tremors. It was the best vanilla sex I’d ever had. My rune tingled like crazy, and I widened my eyes.

“What’s wrong?” I cupped his face with both hands and forced him to look at me.

Tears glistened in his eyes. Was that regret in his dark depths?

My gut clenched. “Talk to me, Lucius.”

“I warned you not to go behind my back again.”

Both of us jumped at the sound of Henry’s lethal voice, and we fumbled with our clothes. Lucius shielded me and closed his pants while I managed to get my G-string on and cover my lower body with his oversized flannel. I looked up and gaped at the gun in Henry’s hand, my chest constricting.

Fascinating, Kelley - but would one really need a condom when having sex with a werewolf?

Anyway, thanks for joining the hop!

Scary ending to a sexy scene!

Methinks Henry doesn't like sharing and intends to teach Cyn and possibly even Lucius the dangers inherent in promiscuity. He also makes me suspect it was the same lesson he taught Eddie, which doesn't bode well for our lovers. I agree with Lisabet. Unless werewolves could be HIV positive, a condom seems superfluous, though it helps remind the reader Cyn is not new to any of this. Intriguing snippet, Kelley.

I appreciated that he showed his wolf side while in the throes of passion. Now I wonder what Henry has in mind...