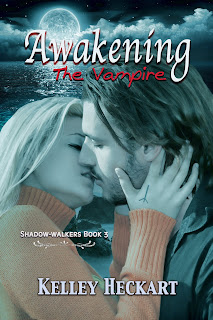 He pulled away and started undressing me, pulling my T-shirt over my head and then he worked on my pants, sliding them down my hips. I bent and slipped my sneakers, socks, and jeans off, tossing them to the side. I stood before him in my matching red lacy bra and panties. Pure desire and affection softened the light in his eyes to a calm sea with faint, yellow glints of sunlight.

He sat on the edge of the bed and hauled me facedown across his lap. “I think a spanking is in order. One for each time you called me Grandpa, Harry Potter, or Giles.”

I tingled in anticipation for both the pain and the pleasure. Merrick slid my panties down to expose my bare butt, and then he smacked my naked skin with his open palm, the sharp sting of the slap sending pleasurable shivers to my swollen nub. My excitement rose, quickening my pulse, and I let out a breathy moan as he struck me again.

With each of the seven spanks, my clit rubbed against his leather-clad crotch and his erection. That urgent ache for release built inside, and I writhed against his rock-hard penis.

Check out the other amazing authors on MFRWSteam!

Too short, Kelley! You're such a tease!

Great excerpt! Thanks for sharing!

Sounds like she was courting danger by calling him those names. But I suspect she suspected she'd provoke exactly what she wanted.

I like her calling him "grampa." I've often wondered how vampires would view mortals--we're like children to them, as well as an all-you-can-eat-buffet. But this guy seems to have matters "in hand." LOL. The spanking must be leading up to something even better!